After earning her undergraduate degree in psychology, Alison Wilcox ’20 went straight to grad school – just not in a direction she had originally planned. Alison admits that enrolling in Dominican University of California’s new Master’s in Business Analytics (MSBA) was a “leap of faith.” That leap has just landed her a dream job with Williams-Sonoma.

As an undergraduate in Dominican’s Adult Degree Completion (ADC) program, Alison was planning for a career in clinical psychology. However, while working on her senior thesis, she made a career-changing discovery.

“I realized that I really enjoyed crunching numbers, working with data, and working as part of a team,” Alison says. “I enjoyed this so much that I told my psychology professor that I wanted to explore this new analytics program Dominican was offering.”

At the time, Dominican was preparing to launch its one-year MSBA in the Barowsky School of Business after identifying a rapidly growing demand among San Francisco Bay Area employers for employees able to transform data into actionable business decisions.

While intrigued by the MSBA, Alison also was cautious. She wondered: Would her background in the social sciences be a good fit for a master’s program in business?

“I was really interested in the data analytics program, but I also was really worried about enrolling in the MSBA because I did not have a background in business – the last statistics course I took was about eight years ago," she says.

Rather than letting fear hold her back, she took the leap. Now, only four months into the program, Alison has been hired as a distribution planning analyst for Williams-Sonoma. In this role, she will analyze data in order to forecast future sales trends for the retailer.

Alison believes that her psychology degree – combined with the work she already has accomplished in the MSBA – was an advantage during her seven rounds of interviews.

“Data analytics is a cut-and-dry business, but behind it all you still have to find a theory to figure out what’s going on behind the numbers,” she says. “Because of my background in psychology, I’m always the one asking ‘why’.”

For Alison, collaborating with MSBA classmates from a wide variety of backgrounds has been an unexpected bonus, especially during the pandemic. Her cohort includes a military veteran, an entrepreneur who started a software company, an accountant, an expert in cybersecurity, and a graphic designer. They have built community despite never having met in person.

“Going into the program, I was really worried that I would not have enough face time with the professors and with other students, but I’ve made so many connections," Alison says. "It’s actually really easy to get to know people virtually – just today I texted with three of my classmates. We work on assignments together and each of us brings a different background.”

This online community extends to the Barowsky School of Business staff. Alison has never met Courtney Budesa, Director of Internships and Professional Development, but communicates with her almost daily.

“I’ve talked to Courtney more lately than I’ve talked with my own mom,” Alison remarks. “Courtney has been there for me before and after my job interviews. She could not have been more helpful – from helping me with my resume to helping me negotiate a salary. During the interview process with Williams-Sonoma, if I had a question I’d just hop on the phone with Courtney.”

It was this personal attention that actually brought Alison to Dominican. She enrolled in the ADC program at age 27 in order to complete a degree she began several years earlier while attending college in South Dakota.

Alison initially planned to attend a larger Bay Area state school. However, despite completing almost all her degree requirements in South Dakota, she was caught in red tape when trying to transfer those units.

“I was told that I would have to take about two years of classes because so many of my credits would not transfer over,” she recalls. “It was so frustrating – I was trying to get my undergraduate degree but there were so many barriers in my way.”

By chance she saw a flyer about Dominican’s ADC program.

“I contacted Dominican on a Wednesday and was registered for classes by Friday.”

Alison was immediately struck by the size of her classes in the ADC program.

“I was used to a university that was large and where there was not a lot of interaction with professors and other students,” she recalls. “Now I was working in a cohort of fewer than 20 people. We all had been out of higher education for some time, so we all came together and relied on each other. It really was like a family unit.”

She credits Dr. Ian Madfes, her capstone advisor, for helping expand her interest in data.

“When you work with data, you often see obvious trends. He kept saying to me, keep looking. You are hitting the surface level, so dig deeper, Alison says. "It was obviously frustrating – just when you thought you had found a revelation, but he really challenged me and I really appreciated that.”

Dig deeper is advice Alison would give others considering ‘what’s next’ in terms of education and careers.

“Do not let your education pigeonhole you,” she says. “A lot of times people think that they have to go from point A to B to C. But sometimes, really great things happen if you keep going to points D, E and beyond. You might develop skills that you would not have gained if you stuck to the ABC path. These skills might help define you.” 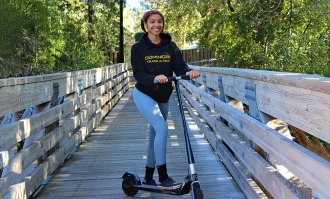