For his research on triple-negative breast cancer, Dominican University of California Associate Chemistry professor Dr. Tyler Johnson has traveled as far away as Hideaway Island in Vanuatu in the South Pacific but, as it turns out, one of his students – Joseph Morris ’19 ’21 MS – merely needed to walk about 50 feet down a hallway in the Joseph R. Fink Science Center on campus to make a key discovery in treating the disease.

Joseph, a graduate of San Rafael High School and now an adjunct professor in the Department of Natural Sciences and Mathematics at Dominican, took NMR spectra of a sample at Dominican of an extremely rare sponge-derived compound from Vanuatu that went on to be used for the first in vivo evaluation (animal study) of the Zampanolide chemotype. This marine sponge-derived Zampanolide chemotype subsequently demonstrated potent in vivo and anti-tumor efficacy against Triple Negative Breast Cancer (TNBC).

“I was curious because there was essentially an unknown metabolite that hadn’t been characterized by our research lab yet and during the process of purifying other sponge-derived metabolites, we collected this new one, this unknown one, and I took it down the hall and thought I’ll just put the sample in and take proton and carbon spectra,” says Joseph, explaining his instinctive decision during the summer of 2020 as a first-year graduate student at Dominican.

“What the spectra revealed is this metabolite wasn’t identical to anything we had looked at before and through the process of a scientific literature review and investigating which metabolites had been previously published from this sponge, we were able to find out that it was indeed Zampanolide.”

For Dr. Johnson this revelation provides potential for the future of TNBC treatment. Combined with
more preliminary data, the research offers promise after Dr. Johnson arranged to have sponge samples re-evaluated from the waters off Hideaway Island (Vanuatu) which he first visited as a graduate student while at UC Santa Cruz.

SIGN-UP FOR CAMPUS VISIT DAY MARCH 18
Triple-negative breast cancer is different from the more common types of breast cancer. It is harder to treat much harder more aggressive. Because it is aggressive and rare, fewer treatment options are available. It also tends to have a higher rate of recurrence.

“If Joseph hadn’t walked down the hall and looked at this unknown compound he purified, I don’t believe we’d be talking about this research today,” Dr. Johnson said in his sabbatical presentation this fall semester for the School of Health and Natural Sciences. “It underscores the value of prioritizing funding for Science, Technology Engineering & Math (STEM) at the graduate and undergraduate level because it catalyzes the ability for young students to single handedly launch important new areas of study in Biomedical research.

“I truly believe if Joseph hadn’t decided to explore the unknown metabolite, he isolated by walking down the hall to pop the sample into the NMR right here and get the spectra, if his intrigue wasn’t there, I’m not sure we would be having this conversation. More importantly the research using Zampanolide to treat TNBC would not be as far along in the pre-clinical development pipeline as it is today.”

Johnson now plans to submit this research discovery as the foundation of a new NIH proposal to acquire funding. He commends the work of his research team including Joseph, Lauren Persi (20'), Colon Cook (19') Nicole McIntosh (17'), Taylor Garcia (19') and Marcos Ogarrio (19') for getting them to where they are today. Joseph unlocked the key.

Joseph’s path to Dominican started after he transferred from St. Mary’s College following his freshmen year. Joseph wanted to compete in cross country in the Athletics Department while studying science. Dominican offered him the best of both worlds.

EXPLORE OUR UNDERGRADUATE PROGRAMS
“It was the right combination of work/life balance where I was able to go balance academics, balance
athletics, and then have his new component where I’m actually in the research lab doing some of the
science that I’ve wanted to do for so long,” he says.

Joseph declared biology as his major upon arriving at Dominican. But when he took Dr. Johnson’s
organic chemistry class, he decided he was better at chemistry and Dr. Johnson suggested he work with him in his research lab by the time Joseph was a junior.

“In his research lab I figured out what I really want to be doing throughout my life is really working on
science and working toward practical goals through solving difficult problems, but still being focused on solving practical problems that people relate to in their everyday lives,” Joseph says.

Such as cancer research. With his quest to acquire more data from an unknown sample, Joseph two
years ago walked from Room 110 to Room 104 in the science center at Dominican and acquired the Zampanolide-related data through the NMR spectrometer situated in the back of the room. About 24 hours later, the data sets were complete, and the results were shared with Dr. Johnson.

“It was quietly exciting for both of us and it’s a little bit of an adrenaline rush certainly because you think `I've figured something out that no one’s figured out.’ It’s something that’s sort of completely new,” Joseph says. “Even though it was just for our research lab it did have wider implications as well.”

Dominican shared its findings with Dr. Susan Mooberry at the University of Texas Health Science Center San Antonio.  Dr. Mooberry, a collaborative colleague of Dr. Johnson while he was at UC Santa Cruz, is now a professor and Greehey chair in the area of Targeted Molecular Therapeutics. She then shared the Zampanolide discovery with her protégé Dr. April Risinger, associate professor in the Department of Pharmacology whose research is focused on triple-negative breast cancer treatment (TNBC). This new collaboration launched the first in vivo (animal) studies of the Zampanolide chemotype for treatment of TNBC and as was recently published in the journal Molecules.

“To find things that demonstrate this level of potential is quite exciting for me,” he says. “It brings
hope.”

Joseph is now applying to PhD programs. He is eyeing UC Berkeley for chemical biology and USC for
gerontology or aging research, but he also is looking at the University of Michigan and one other place -- UT Texas San Antonio that could provide an opportunity to work with Dr. Risinger and continue what he started. 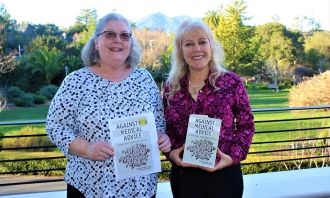 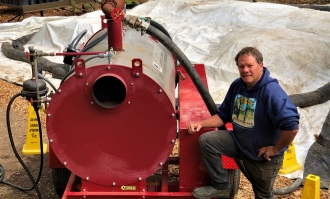