Even before she became the University's all-time career scoring leader in women's basketball in leading the Penguins to their first ever appearance in the NCAA Division II West Region tournament in San Diego March 15-17, 2019 Natalie Diaz '19 said she was living the Dominican dream.

The Dominican women's basketball team — with a 21-7 overall record, its best in 14 years — earned a No. 2 seed for  the Pacific West Conference tournament  and Natalie on March 6, 2019 was named PacWest Player of the Year for the second year in a row. It was the first time Dominican hosted the PacWest tourney in the Conlan Center. In March 2019 Natalie also was named D2CCA All-West Region First Team  and, for the second consecutive year, she was selected to NCAA Division II WBCA All-American team.

Natalie, a Business Administration major, was second in the nation in NCAA Division II women's basketball and first in the PacWest in scoring, averaging 26.0 points per game. She scored a career-high 41 points on November 29 and followed that performance with a 37-point effort in December. Natalie was named PacWest Player of the Week four times this season. Those feats earned Natalie several mentions on KCBS Radio sportscasts on December 5 plus interviews with the San Francisco Chronicle, SportsEcon 101 digital radio, the Santa Cruz Sentinel, and KPIX TV CBS Channel 5 in San Francisco.

Natalie, named Penguins Female Student of the Year in May 2019, was having success off the court as well. Thriving on the individualized attention she has received at Dominican, Natalie during her final season was working an internship with Parnell Pharmaceuticals Inc. of San Rafael in advertising and product management. Prior to that, she served a marketing advertising internship with Dibble and Dibble in Novato.

“Dominican is a small university, but there are so many opportunities,” says Natalie, who is now working at the LEMO Foundation in Redwood City after playing professional basketball overseas in Luxembourg. “Whether it has been coaches, teammates, or faculty, people here have always given me a little push or nudge and encouraged me to pursue the opportunities.”

On January 10, 2019 Natalie scored 25 points to pass Alisha Flaaten's DUC career scoring record of 1,565 points set in 2010. Jennifer Rogers Fernandez, an NAIA All-American and inductee into the inaugural class of the Dominican Athletics Hall of Fame, held the previous record of 1,487 set in 1995 before Flaaten passed her on Feb. 18, 2010. Natalie scored 1,924 points in her four-year career at Dominican.

From Soquel near Santa Cruz, Natalie first came to Dominican on whim. She and her father, Fred, were on their way home from a basketball recruiting trip in 2015 when they turned off the freeway and decided to attend a Dominican women’s basketball practice unannounced.

Natalie officially introduced herself to head coach Tim LaKose, who had been recruiting Natalie by telephone. Coach LaKose introduced her to the team, including two of his key players, Jessy Marshall and Carly Holboke, who gave Natalie a night tour of campus immediately following their practice.

“I remember my dad and I got back in the car and he looked at me and said, ‘I really like this place’ and I responded, `Me, too.’ ”

Natalie, a two-time member of the Pacific West Conference All-Academic team, is now following the footsteps of Jessy and Carly.  Natalie, in her freshman year, joined Jessy in an internship in Dominican’s marketing department. Natalie also interned with Dibble and Dibble where Carly interned and is now working full-time as project manager.

Natalie’s decision to study Marketing was inspired by a Business Communications course she took with Dr. Christopher Leeds as a sophomore. It was Dr. Leeds who encouraged Natalie to interview for the internship at Dibble and Dibble. He also arranged for Natalie to interview entrepreneur Leslie Blodgett, founder and CEO of bareMinerals, on stage when she spoke at Dominican in October 2017 in an exclusive Barowsky School of Business lecture hosted by the Francoise O. Lepage Center for Global Innovation.

During the 2017-18 season Natalie, who was selected as a team captain for the basketball team as a freshman, concluded her third year as a member of the Penguin Student Athlete Advisory Committee. She also represented Dominican at Pacific West Conference SAAC Retreat in Oakland.

Natalie finished the regular season in women's basketball that year as the leading scorer in the PacWest Conference and fifth in the nation in NCAA Division II with an average of 23.9 points per game. She is grateful for all that Dominican has meant to her.

“If this school wasn’t the size it is, I don’t think I would have had the opportunities I have had,” she says. “I have been able to be one on one with the professors. I have had friends who could put me in positions to succeed. It’s the tight knit community at Dominican that really led me to be successful.” 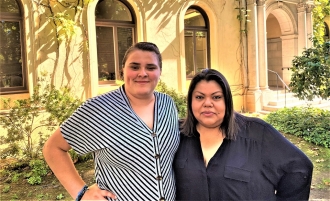