Since transferring to Dominican University of California Matt Fry has earned his BA and MBA and, with an extra year of NCAA athletic eligibility due to the pandemic, he will earn his MSBA this summer about the time he transitions into a full-time job from the internship he started in December of 2018.

He has made the most of his time at Dominican.

“It’s everything I could ask for,” Matt says. “It’s not just set me up for my post college life, but it gave me everything in my college experience I wanted to have.”

It was Matt’s desire to play golf in college that led him to Dominican where this month he won the inaugural San Rafael City Golf Championship. He was a freshman on the golf team at Cal State San Marcos when he had a disappointing season and did not meet his or the coach’s expectations. Matt transferred to Saddleback Community College and got his golf game back on track.

Through a mutual contact (his personal coach), Matt reached out to Penguins golf coach Gary Nelson, who recruited him to transfer to Dominican.

“I really owe all of this experience to him. I sent dozens and dozens of letters to coaches, and he was the only one who responded and showed an interest and had a belief that I had more in me than I showed that first year in college,” Matt says.

“Matt has fully taken advantage of his NCAA career. He appreciates being a student-athlete more so than any player I’ve ever seen,” Nelson adds. “He loves Dominican and has taken full advantage of the university, athletics, and career opportunities that are around our area.”

EXPLORE OUR UNDERGRADUATE PROGRAMS
One of those opportunities was with The Food Connector, a growing San Rafael B2B marketing firm that helps food manufacturers and distributors establish a digital presence and grow sales. Matt in 2018 received notification from Courtney Budesa, Director of Internships and Professional Development in the Barowsky School of Business, about an internship position available at The Food Connector. Dr. Christopher Leeds, one of Matt’s business professors, encouraged Matt to seize the opportunity.

Matt knew from day one that Dr. Leeds, the faculty representative for Dominican Athletics, meant business when he met the professor on his official NCAA recruiting trip to Dominican.

“He said `You’ll come here. You’ll get an internship. You’ll get a job afterwards. That’s the plan.’ ” Matt recalls. “I’m obviously a student who’s coming here to play golf, but I didn’t really see how I could work and play at the same time. I was taken aback by that first meeting thinking, `Wow. There’s a system to this.’ He was very convicted in that. That was eye-opening to me.”

At the urging of Dr. Leeds, Matt applied for and was accepted as an intern at The Food Connector. The Food Connector has since reached out to recruit three more Dominican students – Hannah Feldman ‘22, Nancy Tejeda ‘23, and Emma Hartvickson ’24 – to become interns. And Matt, now promoted to Marketing Manager, is training them.

“I’ve gotten fantastic management experience,” he says. “I’ve learned a lot from how organized you have to be to properly manage people and the responsibility of getting them what they need.”

It was Dr. Leeds’ Business Communications class that steered Matt in the right direction. He rose to meet expectations in the classroom.

“What always stuck out to me about Matt is he is a high-quality writer. It was his submission of a writing sample that got him the first internship with The Food Connector,” Dr. Leeds says. “The sample is the big assignment we require in my biz com class. A great example of how we prep our students for communication success in business.”

Everything else fell into place for Matt. In his first tournament ever at Dominican, in the Sonoma State Invitational, he placed second and nearly won it. Last year, Matt was a NCAA Division II Ping All-Region Honoree and the only Penguin male golfer to compete in the NCAA West/South Central Regional Tournament near Seattle. He tied for fifth individually in this year’s Pacific West Conference golf championships in Arizona, helping his team to a third-place tie.

“My golf experience at Dominican has far exceeded my expectations and given me a lifetime of amazing memories,” he says.

“I feel as an NCAA D2 coach, winning comes down to three things: On course success, strong academic GPA, and using college to set up your next step in life. Matt has done all three,” Nelson says. “He is one of our top players of all time as a golfer, has had an amazing GPA, and set up a full-time career after graduation at a `booming’ startup.”

Matt assumed the role as Director of Production and Project Management when he began his full-time job at The Food Connector on July 1, a month before he graduates with a degree in Business Analytics, the second master’s degree he’s earned at Dominican. With the MSBA, Matt feels he will be even more prepared for a career in business.

“I think in terms of a marketer. I’m pretty abstract with finding solutions, but I did not want to be unprepared for the newest technology impacting the business world, so completing the MSBA program was an easy decision,” Matt says.

In a way, Matt feels on top of the world right now. His college golfing career wound down with a sense of accomplishment and his entry into the workplace upon graduation is secured.

“Dominican’s smaller class sizes helped me. Having to present in every single business class has made me a much more thorough presenter, and that’s something I rely on everyday at work.”

Matt’s final round at Dominican was walking at commencement ceremonies on May 14. He was joined by his fiancé, Emily Lichty, who is earning a Master of Science in Education degree from the School of Liberal Arts and Education. Emily also played golf for Dominican.

Commencement capped quite a comeback for Matt at Dominican. He’s grateful.

“I was getting pretty emotional about graduating,” he says. “As soon as I got to Dominican, I’ve had this strong sense of purpose because I’m so appreciative of the opportunity I was given. Dominican has always provided me with everything needed to become the best version of myself, on and off the course. I really take pride in positively impacting the team and university that has given me so much through the years.” 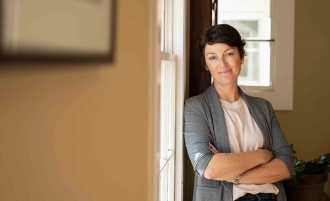 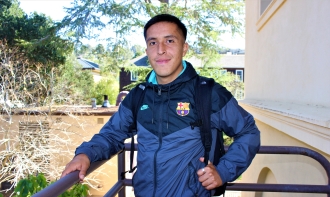