In the eyes and mind of Charray Helton '21, dancing is both a form of expression and a means to tell a story. Charray has plenty of stories to share about her experience in the Alonzo King LINES Ballet BFA in Dance program at Dominican University of California.

The pandemic meant that the dance students trained this past year on a makeshift dance floor located in a courtyard between the wings of Pennafort Hall. From this backdrop, Charray not only danced. She found the courage and inspiration to make movies about her experience in dance and share it.

For her Senior Project, Charray created a dance film entitled “Inside.”  The work depicts the relationship between each dancer and the space and challenges they were given to learn and train the past year during the pandemic.

“Inside” is Charray’s second dance film. Her first film however, was inspired by the Black Lives Matter movement last summer, entitled “BLACK,” which was entered in the inaugural Boulder Dance Film Festival among others and won two awards.

“As of right now, my goal is to create my own dance film company where I collaborate with other artists to display virtual performances, bringing awareness to necessary social and political discussions through dance and film,” Charray says.

“I fell in love with dance film about a year before COVID-19, but being in quarantine is what helped to jump start that vision. I also would like to explore more of the concert and commercial dance world. My ultimate goal is never ending exploration in the craft. I want to inspire others, and continue to be inspired. That’s the love of it all.”

A native of Atlanta, as a high school student Charray was a finalist in the Governor’s Honors Program. The six-week program gave students the opportunity to be completely engulfed in their specialty, be it math, science, drama, chorus, or dance.

“I still consider this program to be one of the highlights of my high school experience, simply because being surrounded by so many people completely obsessed with their crafts motivates you to be equally obsessed,” Charray says. “It was a refreshing experience.”

Determined to continue her education in dance, Charray was drawn to California and the Dominican/LINES program for the variety and versatility it offered.

“I grew up classically trained in ballet, and I felt as though I wanted to branch out from that. What caught my attention however, and what made this program stand out from the rest was the diversity in body types and people that I saw enrolled in the program. I won’t lie, it was comforting,” Charray says.

“It was something that I was not particularly used to seeing in a dance space. The diversity of bodies and people was reassuring. It continues to remind me that conforming to what you think people want you to look like creates this toxic mindset that does nothing but steer you away from the craft itself.”

In addition, Charray said the philosophy of the Dominican/LINES program in the School of Liberal Arts and Education was attractive, as she was craving a different perspective of dance.

“I found the beauty in imperfection,” she says. “I learned to break boundaries I didn’t know existed. The craft became much more personal for me. What inspired me to come to this program was the journey I saw others endure, filled with investigation of the self. What I’ve learned is that just as life, dance is nothing more but the continuous exploration and investigation of the mind, body, and soul.”

Then came the pandemic.

Classroom experiences were replaced by Zoom calls. Instead of going to the LINES Ballet indoor studios in San Francisco, Charray was training with a tent over her head, yet surrounded by friends and classmates.

“There are so many external factors that come with the outdoor space that we typically do not have to experience,” Charray says. “However, I am so grateful for this space, simply because it gave us the opportunity to share a space with one another again, and do what we all love. As dancers we typically feed off others energy, and use that to motivate ourselves and inspire us and help fuel our creativity. When I’m in the outdoor space, I’m always reminded of how special it is that I get to dance, and how special it is that there are people working tirelessly to make sure that happens every day.”

It was Charray’s indoor space, however, that served as the inspiration for “Inside,” which she is presenting for her Senior Showcase on May 1. The limitations it presented to her and friends she chose as cast members evolved into choreography and a movie.

“It explores the negative space between my apartment and four dancers and their atypical dancing space. Due to COVID, and putting everyone’s safety first, I knew that I could not let my dancers touch as a group, and explore each other’s negative space,” Charray explains. “These spaces included my bathroom, hallway, kitchen, and living room. The dancers test just how far they can challenge themselves and their bodies through the duration of the piece. Each dancer also has their own narrative that they are portraying to the viewers. However, the piece is intended for the viewer to feel as though they are inside the dancers’ heads, and invading their interpersonal realm. It can be interpreted that the viewer realizes that not only have they witnessed the dancers become a slave to their own overactive thoughts, but also that they almost find themselves getting trapped as well. The piece explores the literal and metaphorical boundaries or lack thereof of being inside.”

In the meantime, Charray was putting the finishing touches on her other dance film, “BLACK,” which originally was an idea for her Senior Solo that morphed into a much bigger project. It was her first venture into filmmaking and she had a lot of help along the way. Yet, during the process of piecing together “BLACK,” she learned to edit, and film, light a set, etc. Making dance films became a new found passion.

“The inspiration for “BLACK” was sparked by the international protests for Black lives that happened during the summer of 2020.” Charray says. “It was the moment where thousands of people came together in the middle of a global pandemic to fight for the rights of Black and African American people.”

Charray submitted “BLACK” to the Boulder Dance Film Festival, which was held March 25-28. The theme of the festival this year spanned race, mental health, and female incarceration. In collaboration with choreographer Indya Childs and filmmaker Josha Cleveland, “BLACK” won the Judge’s choice award.

For Charray, recognition of that film was a fitting culmination to a trying year and her Dominican experience. It was an eye-opening and galvanizing process, as it was an awakening to her capabilities and the beginning of a new journey.

“To say the least, it has been quite the rollercoaster ride. I’ve been faced with some of the most challenging obstacles, but from that I’ve experienced some of my greatest achievements,” Charray says. “I’ve had my fair share of failures; times where I was so close and just didn’t make it. Now, I know those failures were lessons that helped guide me into the next chapter of my life. I’ve laughed, and Lord knows I’ve cried, but I realize that’s all a part of the experience. And even after all of that, I somehow managed to make it to the end. I think my greatest take away from it all comes on graduation day. I know it’s not the ideal ceremony, but for me it’s a day that I get to finally say, I did it; I won. With the support of my mom, friends, and professors, I somehow managed to push through even when I didn’t believe in myself, because they never stopped believing in me. The knowledge and wisdom that I gained in these four years from my dance instructors and professors have all been stepping stones to get me to where I am now; the finish line.” 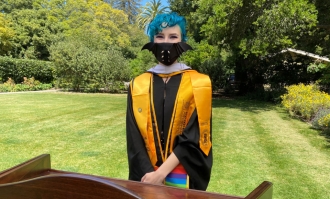 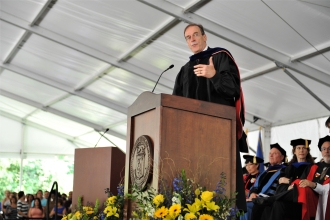