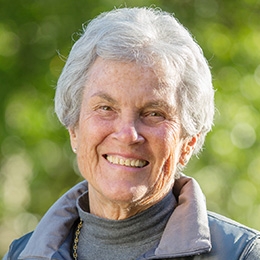 Gay's interest in the study of religion began when she was in the third grade in 1946 at Dominican, then called Dominican Convent. At the age of eight, she was intrigued by the mystery of religious practices to which the loving Dominican sisters exposed her. Her college career began at age 50 in 1988. Her first class at UCB was “World Religions,” which enchanted her. Shortly before graduation from Berkeley with a BA in religious studies, her youngest son died suddenly in his sleep in 1991. Her UC professors encouraged her to continue studies at Harvard Divinity School, where she studied cross-cultural responses to death. After completion of her Harvard master’s degree, Gay returned home to complete her doctoral degree at the GTU in Berkeley. Gay joined the Dominican faculty in 1996, following her master’s work at Harvard. Her commitment to Dominican students runs deep, with a passion for a fusion of erudite scholarship with concrete experiences of her students’ lives.

Harvard University, The Divinity School, MTS, Religions of the World