Student-Athlete Adjusted On The Fly

Though student-athlete Garrett Teagarden’ 20 was unable to complete his lacrosse season at Dominican because of the COVID-19 coronavirus, his hard work and dedication off the field enabled him to finish his occupational therapy field work at Kentfield Rehabilitation and Specialty Hospital before a shelter-in-place order was issued in the state.

Garrett communicated with his professors via email, the Zoom conferencing app, and Google Meet from his home in Petaluma. That was a more pleasant experience than learning about the end of the 2020 Men’s Collegiate Lacrosse Association (MCLA) season while he was 2,500 miles from home.

“I have been receiving frequent updates from them regarding the switch to online learning. All of my professors have been more than willing to answer my questions and address any concerns I have in a timely manner,” says Garrett, who was recently inducted into the Pi Theta Epsilon society. “The Occupational Therapy department faculty have also set up a Moodle forum for all OT students. This is a place where we can share our feelings, concerns, resources, and any questions we have about the coming months.”

Garrett said many assignments apart of their curriculum require collaboration with fellow peers. Therefore, his groups were using the same methods they used to communicate with their professors.

“My biggest priority at the moment is obviously to graduate. I tend to get more distracted working from home, but it is getting easier to stay focused as I become more accustomed,” Garrett says. “Establishing a routine has also been a top priority for me as we transition to online learning. I understand that this is a very difficult situation for those who are unable to complete hours at their sites for the time being. The Occupational Therapy fieldwork office and my professors are doing the best they can to accommodate us and find a solution.”

The OT major believes that with the support of faculty, coaches, classmates, and teammates he is still on the track for success.

“My ultimate goal is to work in an acute care setting with geriatric patients. I feel as if the pandemic will not affect this goal for the time being,” says Garrett, who was a senior in the five-year Health Science/Pre-OT program. “My professors have successfully adapted my classes to an online environment.”

Garrett, a standout lacrosse player who is fast on his feet, had been slowed by a pair of recent setbacks.In March he learned the news that Commencement exercises at Dominican would not go on as planned. Garrett shrugged that off.

“We were told that there will be an in-person ceremony next fall so I don't really see it as a negative,” Garrett says. “It will still happen, just not when I imagined it would be.”

Hearing on March 26 that he and his classmates would not be walking at Commencement in May as scheduled was a little disappointing for Garrett, but not as much as the news 13 days earlier that Dominican’s lacrosse season would be cancelled. The Penguins had won six of their first seven games and were ranked 13th nationally in the Men’s Collegiate Lacrosse Association (MCLA) Redd Rankings when, an hour before they were to scheduled to play fifth-ranked Georgia Tech in Atlanta on Friday the 13th, they were told they would not play Tech, nor any more MCLA matches in 2020. They checked back into the Airbnb property at which they were staying, cut short a three-game road trip by three days, and flew back to Oakland the next morning.

“Receiving the news that our season was cancelled devastated the entire team,” says Garrett who was named the MCLA National Player of the Week after Dominican opened the season with stunning upsets on the road against then No. 7 ranked Arizona State and then 19th ranked Arizona.

“We all get another year of athletic eligibility, but this season, in particular, showed great promise. We had talent all over the field and we were expected to make the playoffs. It will be difficult to get back to where we were, but I am confident that we’ll make it happen.”

Garrett and his teammates rebounded. Dominican’s Athletics Department gave the team the option of meeting with a sports psychologist and Director of Athletics Amy Henkelman offered home workouts to all student-athletes.

In addition, coaches and staff organized a Penguin Student-Athlete Support Group and Max Kaehler, the lacrosse team’s defensive coordinator, was providing an opportunity for all student-athletes to work out with him virtually. Garrett says lacrosse team Zoom meetings (pictured on screenshot above) have helped with morale as well.

“The relationships I have established with my professors, peers, teammates and coaches have always been invaluable to me. I have developed a strong bond with my classmates by working diligently on assignments with them and spending time together outside of class,” Garrett says. “With regard to my team, our brotherhood is strong in response to the countless hours we have spent together. We have always been there for each other and will continue to do so.” 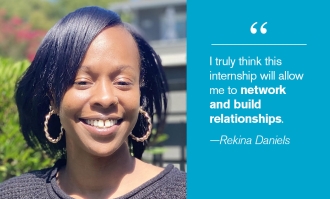 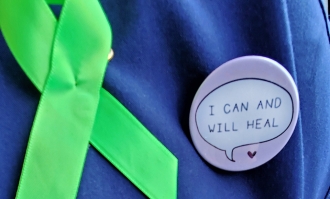 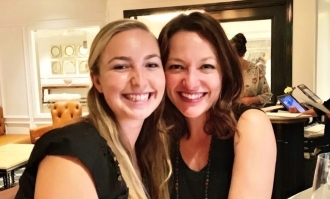