For Andriana Stenros ’19, Lexi Schumacher ’18 and 15 other students in Dr. Jordan Lieser’s Public History course during the fall 2018 semester, the opportunity to extensively research and ostensibly re-create the Angel Island immigration process was more valuable than they could have imagined.

“It was cool to see our work change into something that people can view and use,” says Lexi, who graduated as a double major in Communications and History in the School of Liberal Arts and Education. “I got to work on something out of the ordinary while learning something new.”

By partnering with the California State Parks and the Angel Island Immigration Station Foundation and researching material through the National Archives’ San Francisco office, students in the Service Learning HIST 3901: Public History course showcased their work on December 7 in Guzman Lecture Hall in a historical simulation called “The Angel Island Experience.”

The students’ presentation included the debut of a website, videos, a Junior Rangers Guide, and assigned biographies of Pacific immigrants from 82 countries who, from 1910 to 1940, were processed through Angel Island, deemed the West Coast equivalent of Ellis Island.

“You get to sort of feel history in this way and also learn a lot in the process from the prepared material and the website,” Dr. Lieser says. “There are a lot of learning goals incorporated with the class, but in short, what I want them to do is expand their tool kit outside the traditional research writing, communication, and civic skills. I want them to understand the public role for what historians do and how it is important to our community.”

For Andriana, a history major who transferred from Santa Rosa Junior College, the class aligned with her passion and her purpose. She aims to follow her sister, Eleni Scanagatta ’04, and a cousin, Eleni Katsaros M.Ed ’17, and earn her teaching credential at Dominican.

“One of my favorite things about Dominican in particular is that they even offer a public history class. I’m so lucky to go through this program as it is so unique to be offered at the undergraduate level,” Andy says. “I love history and I want to become a social studies teacher so it was both the need for the course and the interest in being able to do field work in a class that appealed to me.”

The public history course, consisting of history and communications majors, started with site visits and research in such places as the National Archives and Marin Civic Center. The students were eventually divided into four groups to work on selected projects for the Angel Island Experience.

For Lexi, it is her third public history course. In the fall of 2016 for a public history course project on the Marin Headlands, she was led to the New York Times’ archives where she discovered that the Army Relief Society used to stage boxing matches on Alcatraz Island to raise money for orphans and widows of war as part of Fleet Week activities.

The chance to research Angel Island was just as revealing and rewarding for Lexi, now working as Dr. Lieser’s teaching intern.

“It was completely helpful. I learned I could utilize both of my degrees and it gave me a perspective of how I could apply it to my two passions,” Lexi says. “It’s gratifying being able to take research based material and create something in some other context that someone in the public can use other than, say, a 35-page paper. We created a website and a podcast and a video. It definitely opened my eyes to what I have learned at Dominican and how I can share it.”

All the students researched biographical information on immigrants who were processed through Angel Island. Andy studied in the National Archives and applied some of that research to revamping a Junior Ranger Guide for Angel Island, an activity book more specific to the Immigration Station and aimed at educating children. One of her research subjects was a Chinese immigrant named Hom Fook of Sacramento who twice was processed through Angel Island because his father once held a San Francisco address.

“It was a collection on information that few people had ever accessed before,” Andy says. “You feel attached to the person you are researching. It’s a much more personalized experience. We were given more leeway to what we wanted to focus on and find the person we wanted to research. There is the whole notion of Angel Island being the Ellis Island on this coast and it was not really the same. We are trying to break it down and show there was a whole lot to it.”

The showcasing of the students’ class projects was covered by the Marin Independent Journal and Telemundo48 at the Angel Island Experience historical simulation on Pearl Harbor Day in Guzman Lecture Hall.

“It is really a teacher-guided, student-led production of public history,” Andy says.

“In the history program we are not replacing traditional learning. We are adding onto it. This class is a good representation of that,” Lieser says. “Our students understand the impact they, as public historians, can bring to the physical site of Angel Island and, more importantly, to their community.” 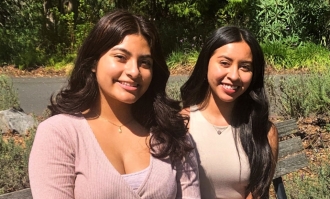 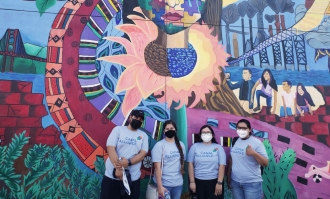