Communication and Media Studies majors, Soren O’Connell ’20 and Forrest Hunt ’20 were thankful for what they saw as a once-in-a-lifetime chance at their young age – the opportunity to jump from Penguin Radio to professional baseball.

This summer Soren, a transfer student from UC Santa Cruz, was the new radio voice of the two-time defending champion San Rafael Pacifics in the independent Pacific Association. He replaced his classmate and Penguin Radio broadcast partner, Forrest, who after serving as the Pacifics’ radio play-by-play announcer last summer, became the director of media relations and broadcasting for the Pacifics’ Pacific Association rival, the Sonoma Stompers.

Both Soren and Forrest were following the footsteps of Dominican alumni such as Geoff Safford ’16, who was the play-by-play announcer for the Stompers and, last season, the Napa Silverados. He is now working for New Media Broadcasters in Montana.

That Forrest and Soren, two Dominican undergraduates in the School of Liberal Arts and Education, received real-world experiences as pros is priceless.

“It’s absolutely sensational,” Soren says. “Broadcasting is a very difficult field to get into for many reasons, but I think it is primarily due to the fact that gaining formal experience is so difficult. So to be able to have this opportunity at the age of 22 is something that I am grateful for to a level that I can't put into words.”

“It's definitely surreal. This is something that I've worked hard for over the last three years as well as my time in San Rafael last year,” says Forrest, who in June was awarded a Bill King Scholarship by the Oakland A’s.

In March, Soren and Forrest did the play-by-play announcing of all 10 games in the Pacific West Conference men’s and women’s basketball tournament hosted by Dominican in the Conlan Center. That workload and the preparation that went into covering three consecutive days of NCAA Division II basketball helped the two train for the rigors – and rewards – of their challenging jobs in pro baseball.

For Forrest, his radio play-by-play stint with the Pacifics was supported by former team president and general manager Michael Shapiro, who is now Executive Vice President of Planning and Development for the Baltimore Orioles. Shapiro has become a mentor for Forrest, who visited him this summer in Baltimore.

“Rarely does a young baseball announcer come along with as much polish and professionalism as Forrest,” Shapiro says. “He does all the important things right: he works hard at his craft, he employs meticulous preparation, he welcomes and listens to critique and he is gifted with an honest, welcoming, personal manner. His announcing blends solid reporting with relevant storytelling. There will be great opportunity and success for him going forward if he remains true to himself and continues to work hard at it.”

Both Forrest and Soren credit Stuart Horne, associate professor in Communications and Media Studies for training and supporting them.

“He's by far had the most impact on my overall growth as far as my on-air presence and how to manage my responsibilities,” Forrest says.

“The experiences I've had calling games with Stu, Forrest, and Ethan Estrada ’21 have been of infinite value,” Soren says. “We've called casual games, championships, and everything in between, so if I had to point to one thing in particular, it would be the very diverse nature of my experiences with Penguin Radio.”

With the Sonoma Stompers, Forrest had to stretch his skill set. He announced home games for KSVY and broadcasts away games on radio. He was also responsible for writing the team's press releases, game stories for the team's website and local newspaper, as well as being in charge of the team's social media outlets which include: Facebook, Twitter, Instagram and YouTube.

“Dominican has been vital in preparing me for this,” Forrest says. “I like to give all of my credit to Stuart Horne and the faculty at Dominican who carved this path for me and gave me the confidence to chase it. They have given me the opportunity to dive into as much as I could handle over the last three years and I think I took advantage of it. I've buried myself in hundreds of hours of production work and on-air work in various events and sports. I understand not only how to speak into a microphone eloquently, but I can think quickly on my feet and troubleshoot any technical problems which is invaluable.” 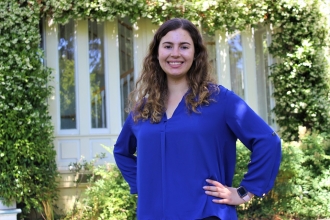 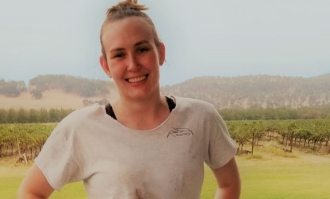 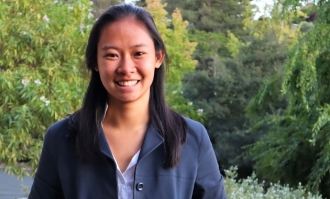