Graphic Design major Terise Camasura ’20 and Peter Hoo ’22, a double major in Graphic Design and Visual Studies/Art History, helped build a della Robbia website in a class project by doing research on the history of the replica plaques from the Renaissance era that they realize now had been under their noses for years.

The Della Robbia of Dominican University website was born out of Dr. Leslie Ross’ “Renaissances in the Global World” course and consolidated the findings of each ceramic della Robbia sculpture on the exterior of many campus buildings. Luca della Robbia was an Italian sculptor from Florence who was renowned for his colorful, tin-glazed terracotta statuary.

Peter was one of eight classmates who wrote stories on the replicas/reproductions of Italian Renaissance artworks donated to Dominican, and Terise created the website that houses them.

“I had seen the plaques, but I didn’t know what they were. I knew it was something special,” Terise says. “It’s exciting to know that people can see the website now, and see the history and maybe add to it.”

Building a website wasn’t on their radar when Terise and Peter came to Dominican from Christian Brothers High School in Sacramento and King’s Academy in Sunnyvale, respectively. They were drawn by scholarship offers and recommendations from friends and family. Peter’s mother, Patty Hom `86, and grandmother, Dr. Gloria Hom `62, both graduated from Dominican.

“I didn’t think I’d get this involved. I didn’t expect this from my art history class,” Peter says. “The last thing I would expect is making a website. Usually you find that in a digital design class. I expected to write papers that would be published online, but a website!?”

“It was a great class project in experiential learning and teamwork,” Dr. Ross says. “This was a serious and lengthy research project that involved participation from all students in the class. Students were asked to research and describe the sculptures; work together on editing and website format.”

Dr. Ross asked each student to study a plaque. For example, Peter was assigned a plaque of the Madonna enthroned with Saints located on the wall to the left of the main entrance to Guzman Hall. His research started from scratch.

“It had no name on it and it was hidden,” Peter says.

Peter and the other students discovered each plaque’s history.  The Madonna enthroned with Saints is a replica of a della Robbia plaque from the church of St. James at Galligano, Italy.

Eight students submitted their research and observations in writing and Terise designed the website. She had previous experience creating a website for an Honors Capstone class about the history of Dominican.

“This one put all the skills I learned from that one to work,” she says. 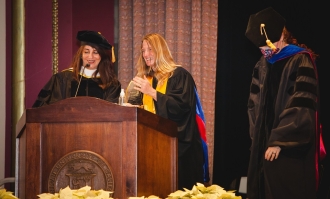