Forrest Hunt ’20 has a voice in his career choice, and you can hear it loud and clear.

The Communication and Media Studies graduate from Dominican University of California is an associate audio producer at 2K Games in Novato where two years ago he was hired to do voiceover for the college basketball portion of MyCAREER. In October, he was hired full time and expanded his duties to include researching, script writing, and broadcast presentation for the NBA 2K series, as well as continuing to provide the voiceover for the NBA 2K21 and NBA 2K22 video games.

Forrest, who was the primary voice for all sports broadcasts on Penguin Radio while attending Dominican, credits the fundamentals he learned from professors such as Stuart Horne and Brad Van Alstyne for preparing him for his current career in the video game/tech industry.

“One of the biggest things is the personalization of the education. Whatever I wanted to try, I had the backing of the CMS department to do,” Forrest says. “Professors were always challenging me to go outside my comfort zone and think critically. Aside from that, lots of the fundamentals of working in an audio department and working on broadcast presentation came from my first-hand experience doing all of that with Penguin Radio.”

As research for his new job, Forrest watches NBA games and takes notes of broadcast styles and what announcers say to help him with script writing for video games to maintain the authenticity of its video re-creation. Forrest also spends multiple hours playing PlayStation 5 in order to understand what styles work and do not work as far as how broadcasters would call specific play-by-play action in real life.

“We really want to focus on the user experience and if lines aren't being delivered authentically, people are going to recognize that. Anyone can turn on an NBA game on TNT and notice that what Kevin Harlan or Brian Anderson say in real life is incorporated into our broadcasts,” Forrest explains. “I also make sure lines about certain players are up to date and as accurate given their playstyles.”

EXPLORE OUR UNDERGRADUATE PROGRAMS
Forrest, who graduated from Montgomery High School in Santa Rosa, also continues to rely on the advice of mentors in the School of Liberal Arts and Education, namely Brad Van Alstyne and Stuart Horne, who occasionally plays golf with Forrest to keep in communication.

“Brad and Stu have been instrumental to not only my professional growth, but my personal growth. They are people I can call at any time, and I know they'll give the best wisdom and suggestions possible. There's no way I'd be where I am today without their support and advice.”
Forrest also remains in contact with L.A. Dodgers and Fox television announcer Joe Davis, as well as with Ken Korach, radio play-by-play voice of the Oakland A’s who Forrest met when he received the Bill King Scholarship Award on the field at the Oakland Coliseum in 2019.

While at Dominican, Forrest had internships with the San Rafael Pacifics and Sonoma Stompers of the Pacific Association in independent baseball where he served as director of media relations and broadcasting. 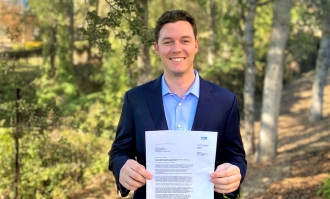 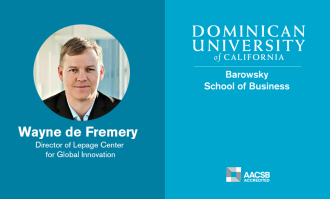 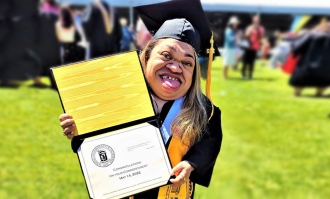