When she wasn’t producing a PBS documentary, developing the MFA in Creative Writing program, or publishing books of poetry, Joan Baranow was slowly but surely nurturing a feature-length documentary about a brave young woman trying to live a normal life with terminal cancer.

The Time We Have was a labor of love for Baranow — a stop-start effort that spanned 14 years. The film recently won the award for Best Documentary at the UK Film Review Festival. The festival took place on November 13-14 online.

The film follows the last year in the life of Caitlin Dolaghan, a teenager who spent five years battling osteosarcoma, a rare bone cancer. Caitlin was told by her doctors that the cancer had spread to her lungs and that further treatments would do little to prolong her life. Against all odds, Caitlin lives a full year beyond her prognosis.

Baranow became involved with the project around the same time she was producing the PBS documentary Healing Words: Poetry & Medicine. Co-produced with Baranow’s husband, physician Dr. David Watts, Healing Words tells the stories of patients whose lives have been dramatically changed by the incorporation of poetry into their recovery process. Production was wrapping on Healing Words, when the documentary’s director and cameraman David Drewry met and won the trust of Caitlin and her family.

Filming on The Time We Have started in 2005, documenting Caitlin as she set about achieving goals: to go to prom, to graduate from high school, to meet some of her heroes.

“The family welcomed David and his camera into the house — they felt that this was helping Caitlin make a difference by sharing her story,” Baranow says. “The whole time she had a big tumor near an artery in her heart, and if that tumor eroded through the artery then she would die. She was living every day with that possibility.”

Baranow met Caitlin only once — when they worked together on poetry writing. Poetry, Baranow says, can strengthen compassion between healthcare providers and those who seek a state of well-being beyond the reach of surgery or pharmacology.

“Being cured of disease is not the same thing as being healed,” she says. “A practice of expressive writing promotes both spiritual and physical healing.”

Baranow and Watts have been involved with poetic medicine for more than a decade. The two sponsor a Narrative/Poetic Medicine Poetry Prize, and their small independent press, Wolf Ridge Press, publishes the winning manuscript. Dominican’s MFA offers a track in Narrative/Poetic medicine — one of the only universities in the United States to offer a creative writing program focused on this form of storytelling.

In The Time We Have, Caitlin is filmed reading her poetry to physicians and residents at UCSF Benioff Children’s Hospital in Oakland during medical grand rounds, where she shared the benefit of writing as part of her program of care.

“Amazing and unexpected things happened during that year,” Baranow says. “Caitlin was featured in People magazine, which led to getting phone calls from her biggest idols, musician Amy Lee and actor Johnny Depp. We managed to catch some exciting moments on film.”

Caitlin and her family were fascinated with the Lord of the Rings Trilogy — the film’s vision of life as a quest helped the Dolaghan's accept what Caitlin was going through. As the trilogy was so meaningful to the family, Baranow wanted the films’ clips and music integrated into the documentary.

One scene shows the family watching Lord of the Rings in their living room. Just obtaining permission to use the clip and the music took Baranow about a year, from finding the correct contacts and then “working through all the legal stuff.”

“There were so many emails back and forth,” she recalls. “I was doing production work while at the same time learning how to tell this story and make a feature length film.”

Tackling the subject was a learning curve for all.

“My film editor David Drewry and I knew how to make beautiful scenes, but we had to learn how to fit the scenes together.”

One thing that did not change throughout the lengthy production process was the film’s title.

“For all these years, we always knew was what was going to be our title,” she says. “We focused on the question: What do you do with the time you have?”

Music is a critical component of the film. “We used a lot of royalty free music, but with certain scenes we would go down the audio rabbit hole and still could not find the right music,” she recalls.

A close-to-home, yet completely unexpected, solution helped to enhance a few critical scenes.

“I was walking down Acacia and heard music coming from Angelico Hall,” Baranow recalls. “I immediately thought, ‘that sounds like our film.’”

The source of the music was Anthony Circo ’14 who was playing his own composition. They exchanged information and Baranow tucked away Anthony’s information for future use.

“Fast forward some years later – I believe 2016. Anthony had graduated and I’m embroiled in doing this film. In a department meeting on campus June (Oh) mentions something about Anthony – about how he’s starting to make it in Los Angeles with his music career.”

Baranow immediately contacted Anthony and invited him to work on composing music for The Time We Have. “I just love this Dominican connection,” she says.

Slowly but surely the film was ready for screening. It premiered at the New Hope Film Festival in July, and Baranow is continuing to contact other film festivals and plans to also screen the film on campus.

“I remember thinking towards the end of the process — after so many years and going in so many different directions — that I think we have arrived. Caitlin’s story is finally told!” 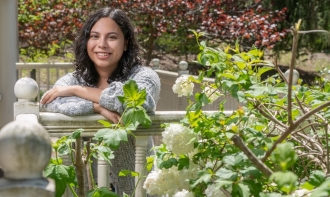 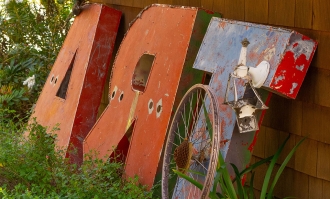