Joanna Hoffman, one of the original members of both the Apple Computer Macintosh team and the NeXT team, received an honorary Doctorate of Humane Letters degree and delivered the keynote address at Dominican University of California’s 2019 commencement ceremony.

Hoffman helped roll out the Macintosh internationally, as well as manage the extension of the Macintosh product line domestically.

“We are honored that Joanna Hoffman has accepted our invitation to address our graduates,” said Dominican University of California President Mary B. Marcy. “As a pioneer and thought leader, Joanna has helped shape an entire industry that has revolutionized the way we work, learn, and interact. She is deeply interested in how technology influences and improves our lives, questions we are actively engaging on the Dominican campus.”

In 1985 Hoffman followed Apple co-founder Steve Jobs to NeXT. Subsequently, infatuated with bleeding edge technology, Hoffman joined a string of pioneering start-ups in artificial intelligence, smart TV, and intelligent personal assistants and telephones. The last being General Magic, a spin off from Apple, where as vice president of marketing, she was responsible for product marketing, developer strategy and support, and coordination with marketing teams from Motorola, Sony, AT&T, and other partners and licensees.

Hoffman now works with both educational and environmental non-profits. Recently, during a conversation with students enrolled in a Computer Science course at Dominican, Hoffman talked with students and faculty about the interconnections between technology, social justice, ethics, and equity.

Hoffman’s undergraduate degree is from the Massachusetts Institute of Technology. She spent a year doing field work and research in archaeology in the former Soviet Union under the direction of Boris Piotrovsky, the director of the Hermitage, and a year in the Ph.D. program in Near Eastern Studies at the University of Chicago.

Hoffman was born in Warsaw, Poland, and was raised in Poland and Soviet Armenia. She immigrated to the U.S. in 1968 at the age of 13. 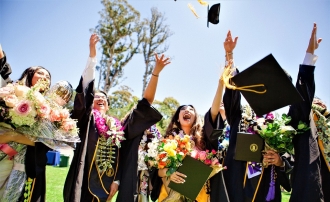