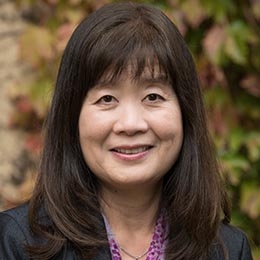 June Choi Oh, Chair of the Department of Music, Dance and Performing Arts, holds BM and MM degrees from the Juilliard School, where she was a recipient of the prestigious Endowments for the Arts Scholarship and the William Petschek Scholarship Awards. She has concertized around the world, appearing as soloist with the New Haven Symphony, Aspen Concert Orchestra, and Filarmonica de Jalisco in Mexico, among others.

As a recitalist, she has performed at the Dag Hammarskjold Auditorium at the United Nations in New York City, Dame Myra Hess Memorial Concert Series in Chicago, Kieler Schloss in Germany, and Stadsgehoorzaal in Holland, also appearing in the Aspen Music Festival and Victoria Music Festival (Canada).  She has performed on radio stations WNCN in New York City, WPKT in Connecticut, WFMT in Chicago, and KQED in San Francisco, as well as on nationally televised performances on PBS, and abroad on Danish National Television (DR).