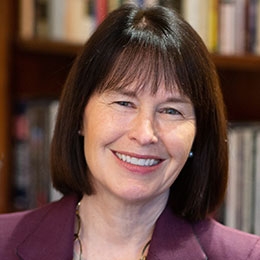 Mary B. Marcy is the President In Residence at Harvard University’s Graduate School of Education, and President Emerita of Dominican University of California, where she served as President from 2011-2021. Under her leadership, Dominican gained national attention for a transformation rooted in creative programs, purposeful partnerships, and a commitment to academic excellence.

Marcy’s inaugural vision led to the creation of the Dominican Experience, which has become a transformative reality for students, as evidenced by dramatic increases in student success, satisfaction, and graduation rates.  These achievements are particularly notable in a student population that is highly diverse, including an undergraduate population that is over 60% students of color, over 1/3 Pell-eligible, and which includes many first-generation college students.

In 2020, Dominican secured the nation’s top award for transformation from the American Council on Education and Fidelity Investments. The following year, Dominican was named 10th in the nation for early graduate career earnings in the nation, joining the ranks of some of the country’s most elite institutions.

During her tenure, Marcy was invited by the State of California’s Chief Service Officer to lead an effort to develop an innovative statewide program designed to help students pay for college through public service. The Civic Action Fellowship launched in fall 2020 with a coalition of public and independent universities led by Dominican.

During her decade of leadership, the annual fundraising support for Dominican increased by more than 30%. Marcy secured record-breaking commitments to support the comprehensive renovation of the 130-year-old Meadowlands Hall into a state-of-the-art health sciences complex, seven-figure gifts in support of the Dominican Experience and the Barowsky School of Business, gifts to complete and expand the Allen Athletics Complex, and most recently, a seven-figure gifts support of the expansion of the athletics program and the implementation of coronavirus testing. The Dominican Experience in particular attracted funding from major donors, as well as The Andrew W. Mellon Foundation, the Teagle Foundation, the Arthur Vining Davis Foundations, the Fletcher Jones Foundation, and the William G. Irwin Charity Foundation.

Marcy is a recognized leader in the subjects of higher education, governance, change management, and small college innovation. Her book, The Small College Imperative: Models for Sustainable Futures, was released by Stylus Publishing in 2020 and was named one of the 2020 Top 10 books on higher education in Forbes. She has given a wide range of presentations and published extensively on the issues facing the academy, the future of higher education, and student success. She is regularly quoted in the media related to her research and initiatives, including The Wall Street Journal, The Washington Post, Times Higher Education, The San Francisco Chronicle, NPR, The Chronicle of Higher Education, and Inside Higher Education.

Prior to Joining Dominican

President Marcy served as Provost of Bard College at Simon’s Rock and Vice President at Bard College from 2004 until 2011. Prior to her leadership at Bard, she worked in both public and private institutions of higher education, including a grant-funded Project on the Future of Higher Education.