When English and History double major Monica Barry ’20 was selected to attend Oxford University in 2019 as a recipient of the Thomas and Joanne Peterson Endowed Scholarship for Dominican Scholars at Oxford, she admittedly cried tears of joy.

“I feel so fortunate. I can’t even put into words how much it means to have this opportunity. Oxford is a dream school,” Monica said then. “I’m so thankful to the donors and Dominican. It really solidifies how happy I am here.”

Well, Monica left Dominican happier than ever. A graduate of Eagle Rock High School near Pasadena, who recently earned a Master of Arts in Social Sciences at the University of Chicago, was named “Outstanding Student” for the Class of 2020. Monica's ultimate goal at Dominican was to pursue a PhD in History, as she would someday like to teach history at the college level so she can both teach and conduct historical research.

“She is the most complete representation of the Dominican Ideals that I have ever had the pleasure of interacting with on campus,” says Dr. Jordan Lieser, history professor.

Monica came to Dominican as an English major, but Lieser suggested that she look into history as a minor or second major. With the additional help of professors Perry Guevara and Judy Halebsky in the School of Liberal Arts and Education, Monica decided to become a double major and soon after assumed leadership roles in Dominican’s History Club.

“My advisers sat down with me and came up with a plan,” Monica recalls. “They showed me that they cared and that Dominican cared.”

Monica cared about Dominican as well. She became a student ambassador and participated in the “Shakespeare and Social Justice” arts-in-correction program in San Quentin State Prison through Dominican’s partnership with the Marin Shakespeare Company. She presented at the National Conference on Undergraduate Research (NCUR) at the University of Central Oklahoma in 2018 and at Kennesaw State University in Georgia in 2019 and was scheduled to give at oral presentation – “More, Pope, Swift: the Progression of English Satire and Intellectual History” – at this year’s NCUR at Montana State University before the COVID-19 pandemic cancelled the event.

Prior to that, Monica authored the story “How To Prepare For PhD As An Undergraduate” for Colleges of Distinction. She also added a visual studies minor and last semester participated in a “Renaissances in the Global World” course that produced a della Robbia website for Dominican.

Going to Oxford, however, was never in Monica’s plans.

“I was so shocked. It was Oxford. How do you not go?” Monica said. “Coming into Dominican my freshman year I had no intention of studying abroad. At the time it was hard enough to leave L.A. and move a six-hour drive away from home. I couldn’t have imagined leaving the country.”

Monica left for Oxford inspired by her mother, who had passed during her sophomore year at Dominican.

“It is my opinion that Monica turned what was a crushing sadness into an inspiration, pursuing everything Dominican has to offer and, decidedly, giving everything she has to Dominican,” Lieser says.

While preparing for her fall in Oxford, Monica sought the advice of Sophia Stetson ’19 who, along with Jake Quast ’19, were Dominican Scholars at Oxford in 2017. In 2019, Jake was named Outstanding Student at Commencement.

“My experience says a lot about small schools,” Monica said. “A lot of times when people look at the big picture and at bigger schools they think they are going to get more opportunities and greater internships, but it is small schools like Dominican that have so much to offer. It’s so much more personal.” 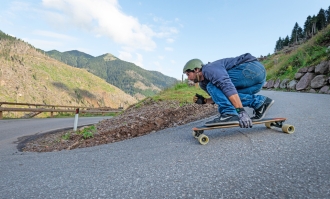 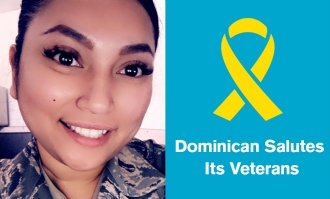