This real-world focus is exactly why Dylan selected Dominican University of California’s accelerated ACS program, which allows students to be career-ready with an undergraduate degree in as little as three years.

“I really never considered any other programs,” Dylan says. “ACS at Dominican is completely different from all other college programs. Dominican is teaching skills that are needed right now in industry.”

Dylan is part of the Shopify Dev Degree program. Not only is he taking classes with Dominican’s ACS faculty – all of whom have broad software engineering experience in the tech industry – he’s also building an impressive resume working with development teams at Shopify.

Dylan filled out two separate applications: one for ACS at Dominican and the other for Shopify’s selective Dev Degree scholarship. He was admitted to ACS and won his scholarship. While all ACS students work on hands-on, real coding projects from day one of the program, being in the Dev Degree program gives Dylan the opportunity to have an ongoing internship at Shopify while he completes his degree.

Launched in 2016 in partnership with Ottawa’s Carleton University, followed by Toronto’s York University in 2018, the program was developed to bridge the gap between higher education and the workplace. In 2021, Dominican’s Barowsky School of Business (BSB) became Shopify’s exclusive U.S. partner.

The ACS project-based curriculum balances technical computer science courses and hands-on software product development to prepare students for careers in software technology companies and startups. The program also provides a solid grounding in the liberal arts so students can develop the communication skills necessary to work on cross-functional teams of tech professionals.

This mix means that students can develop their interests while becoming well-rounded employees who can design, build, and launch software products; practice quantitative and qualitative reasoning; interpret and evaluate data sets, and learn strategies for effective communication in multiple domains — from coding craftsmanship to written and oral communications.

The program is a great fit for Dylan, who has been interested in computer science “for as long as I can remember.”

“I always took as many CS courses as possible from elementary to high school,” he says.

He experienced the value of hands-on work while attending Homewood High School in Homewood, Alabama. The school had a partnership with a local career technical school, offering a program called Microsoft Teals in which software engineers would teach computer science classes.

“This allowed me to build relationships with actual engineers and obtain skills that only industry professionals have — in high school.”

Although he is attending classes online, Dylan decided to live on Dominican’s Marin County campus in order to enjoy a more traditional college experience and take advantage of the close proximity to San Francisco and the greater Bay Area, including Silicon Valley.

It’s the best of both worlds.

“I enjoy the online format of the ACS program and the Dev Degree Program because it allows me to do school and work from anywhere. If I wanted to do work and school from Alabama one week and California the next I could.”

The Bay Area, he notes, is a great place to be for computer science students. He looks forward to attending tech conferences and events when COVID regulations ease.

“There is just something so inspirational about working in the same area as all of the companies on the bleeding edge of innovation in tech. Whenever you are driving around you see buildings with logos of companies which products you use every day, and I find that so inspirational.”

Dylan has found community with other students also opting to live on campus.

“The on-campus ACS students are constantly working on projects together as well as helping each other out when someone gets stuck,” he says. “Even though all of our classes are online, there is a ton of value in the offline relationships that we have built on campus.”

Dylan also appreciates the instructors in the tight-knit ACS program, many of whom have worked with some of the Bay Area’s leading tech firms and are enthusiastic about serving as mentors and involving their students in networking events.

“All of my instructors are constantly pushing me to do more even if I have already met the requirements. I think that this is very powerful because you can always improve on your work,” he says. “When you get a job it is not only expected of you to meet the minimum requirements rather it is expected that you go above and beyond.” 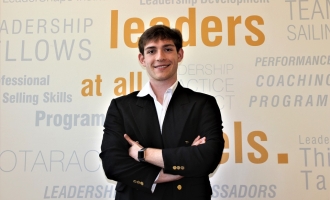 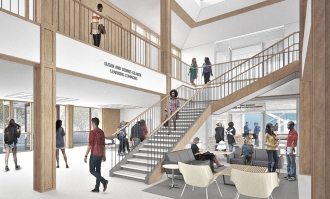