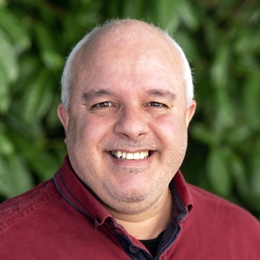 School of Health and Natural Sciences

Dr. Mohammed El Majdoubi holds a BS in Physiology (1991), a MS (1992) and a Ph.D. in Neuroscience & Pharmacology (1996) with a focus on neuroplasticity from the University of Bordeaux, France. Dr. Majdoubi came to the United States in 1997 to work as a Research Associate studying the neurobiology of puberty at the University of Pittsburgh Primate Center, before joining the University of California San Francisco in 2000 as an Assistant Research Scientist and Director of the Morphology Core Facility. He joined the faculty of Dominican University of California in 2005, where he serves as a Professor of Neuroscience in the Department of Natural Sciences and Mathematics. His current research is focused on the neuroendocrine differentiation of embryonic stem cells as a model for investigating neurotoxicity of environmental pollutants. Dr. Majdoubi has published 20 peer-reviewed scientific publications and has given 30 presentations at international meetings including a TEDx talk and several media interviews. He teaches a broad array of undergraduate and graduate courses, including Neuroscience, Organismal Biology, Stem Cell Biology, Neuroethics, Research Methodology, Human Neuroanatomy and Physiology and Cell Imaging Technology. He also teaches courses for the Honors Program and serves as a staff instructor at the Osher Lifelong Learning Institute. Dr. Majdoubi was honored by his students with the Dominican Teacher of the Year Award in 2009.

University of Bordeaux I, B.Sc., Physiology

Neuroendocrine cells are a set of specialized hormone-releasing neurons that control most vital functions in humans and wildlife such as growth, reproduction, metabolism and stress responses. Increasing evidence points to neuroendocrine cells as the primary neuronal target of endocrine disruptors (such as plasticizers, flame retardants, fungicides, pesticides and pharmaceuticals). Endocrine disruption appears to be most significant during prenatal and early postnatal development. However, limitations with traditional cell culture models of neuronal development lead to a lack of understanding regarding the mechanisms by which endocrine disruptors affect neurodevelopment. In recent years, stem cell-derived neuronal models have become available and may offer distinct advantages over other in vitro model systems for investigating toxic effects of endocrine disruptors on the developing brain (ie, Developmental Neurotoxicity). As part of this effort, Dr. Majdoubi’s laboratory is developing a new model of stem cell-derived neuroendocrine cells which could provide more effective ways for studying the effects of endocrine disruptors and their mechanism of action directly on developing neuroendocrine cells in vitro. In addition, this project provides an opportunity to generate a core of highly skilled undergraduate students trained in stem cell technologies, who can use their skills in laboratories of both academia and biotechnology immediately upon graduation.