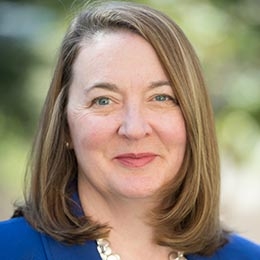 Since 2016, Marly has served as vice president for Advancement at Dominican, as a member of the President’s cabinet, and on numerous committees across campus. In 2018, she also took on the Public Affairs department: working with city, county and state government, as well as external partnerships with non-profits.

Marly came to Dominican from the University of San Francisco, where she led Corporate and Foundation Relations for three years, as well as Principal and Major Gifts for 14 months; helping build the structure for the university’s first-ever comprehensive campaign. Marly’s decade of work at large institutions include working as director of institutional relations at the Smithsonian Institution, where she led corporate & foundation philanthropy for 19 museums, nine research centers, and the National Zoo during the quiet phase of a $1.5B campaign; and as senior associate director of Corporate and Foundation Relations at the University of California, Berkeley.